In India, we have car loans, education loans, home loans, but we don’t have direct options for solar loans.

India is at a crossroads, where the country’s economic growth and residents’ well-being are dependent on energy access. India’s energy demands will be heavily reliant on clean and renewable sources, given the global debate on climate change and the country’s own Nationally Determined Contributions. Nearly 15% of India’s 1.39 billion people are projected to be without power, and millions more are likely to be living in the dark even in areas that have been designated as “electrified.”

The Indian government stated in April 2018 that all villages in the country had been “electrified,” but this does not imply complete electrification. If 10% of a village’s residences and public spaces are connected to the grid, the village is deemed electrified. In reality, only about 8% of newly electrified villages had all of their homes powered, and less than half of all village households in India have access to more than 12 hours of electricity every day. Indians are energy-starved, with an average power per capita usage of 1,181 kWh, one of the lowest in the world, and demand greatly outweighs supply.

After China and the United States (US), India is the world’s third-largest emitter of greenhouse gases, and it will likely remain so for the next two decades. Despite exponential development in renewable energy, nearly half of India’s power generation will be based on coal by 2030, according to government figures. The power industry will account for over 80% of India’s total carbon emissions by 2040.

India’s top concerns include ensuring energy security and decreasing emissions, primarily by reducing reliance on hydrocarbons. The Indian government established a goal of adding 175 GW of renewable energy capacity by 2022, with 100 GW coming from solar, 60 GW from wind, 10 GW from bio-power, and 5 GW from small hydropower.

The total investment required to achieve this target has been estimated at US$150-200 billion. In his address to the UN Climate Action Summit in September 2019, Prime Minister Narendra Modi announced that India would take the overall target to 450 GW, requiring significantly huge investments. The overall investment required to meet this goal is projected to be between $150 and $200 billion. Prime Minister Narendra Modi declared in September 2019 at the UN Climate Action Summit that India would increase the overall objective to 450 GW, requiring considerable investments.

In this article, we are going to explore how platforms like GooglePay, PhonPe, and companies like Paytm can solve the Indian Solar Financing issue.

To understand the present scenario of getting financial help for solar solutions (only Off-Grid), you have to divide the whole possibilities into two parts: Direct Financing & Indirect Financing.

If we see Direct Financing in the solar industry, there is zero support available. Not a single brand like Canadian Solar, Luminus Solar, RenewSys Solar, etc. is having any loan facility for their consumers.

Now, if we talk about Indirect Financing, there are some options available like purchase solar solutions on EMI (Debit & Credit Card), and home improvement loans.

1 lakh is not sufficient for a solar solution.

And this is one of the biggest reasons why the off-grid solar (residential) market is declining.

First of all, we need to understand this, what do companies like GooglePay, PhonePe and Paytm do and how they help in growing any business sector. These companies are registering the user by their bank details & verify it (virtually & physically both). After the verification has been done successfully, it creates a UPI ID (Unified Payments Interface). This Id is unique for every user. With this ID, users can pay or receive the money directly in their bank within seconds.

To create this unique ID, the user fills in every important detail of this application. That means these applications have all the verified data of the consumer. At present, the maximum number of bank holders (including businesses) have UPI DI either they have Debit / Credit cards or not.

And if we analyze all the data these companies verify, that’s exactly the same as what the loan providers verify. In addition loan providers also verify the monthly transaction of the customer while these companies already have that information. Even these days many consumers are paying electricity bills through UPI. That means these platforms have not only monthly transactions details, but also have the data of monthly consumption of the electricity of every user. 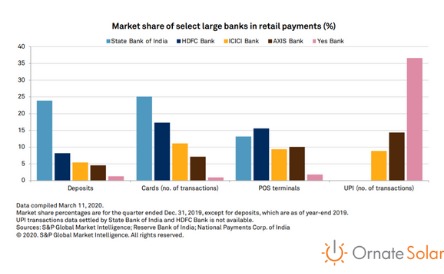 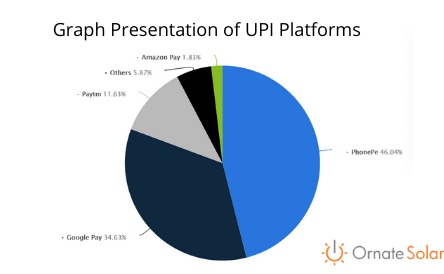 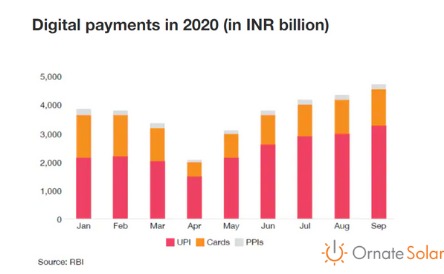 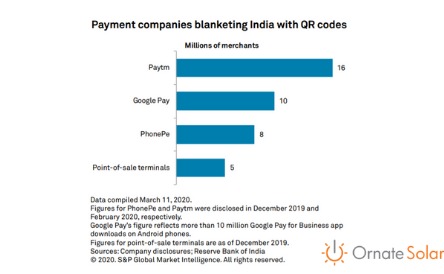 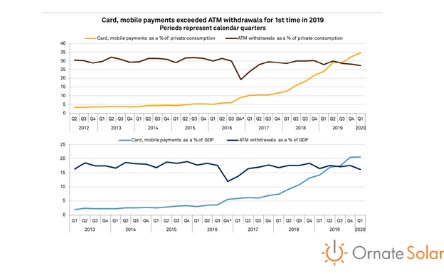 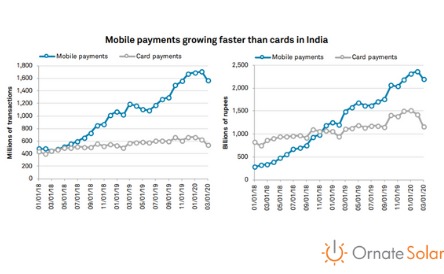 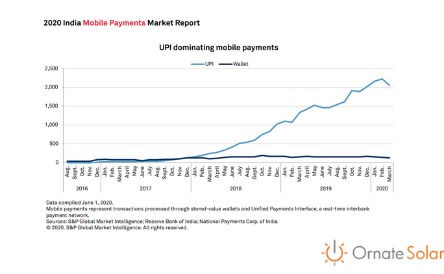 Note: All graphical data is taken from RBI financial reports.

Financial Solutions by These Platforms

It’s not like they would be doing this for the first time. These platforms do provide financial processing services to multiple companies. We do see many company’s ads on Phonpe. 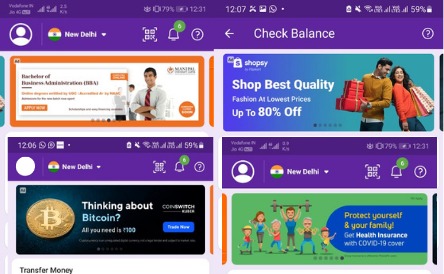 It means these platforms have a chance to help the residential rooftop solar sector to grow.

How Can We Help?

Hope this information about the Solution to the Indian Solar Financing issue for End-User helps you.

If you are planning to install a solar solution, you can connect with Ornate Solar to get the best prices for solar panels and inverters. We are the official partner of Canadian Solar panels & Renewsys solar panels in India. We are also the official distributor of SolarEdge inverters with DC optimizers, Enphase microinverters, Fronius On-Grid Inverters, and Havells solar inverters in India.