India’s Solar Power Price is Rising After A Decade

India’s Solar Power Price is Rising After A Decade

The reason why solar energy became the fastest growing economy in the past decade was its price. From 2009 to 2019, the cost of solar energy has declined by 90% but this is not the case anymore.

In comparison to 2019, the price of solar modules has risen by 18%. The reason behind this rise is the cost of polysilicon which is the key raw material in solar cell manufacturing. The cost of polysilicon has increased by four times. Not only that, but the price of inverters in India has also increased. The Government of India has increased customs duty on inverters to 20%, which has also added to the rising price of solar power installations.

Moreover, to develop a domestic solar manufacturing industry in India, the government has decided to impose 40% basic customs duty (BCD) on solar modules and 25% on solar cells from 1st April 2022. This makes it very clear that the solar energy price will rise in India.

In a discussion with Bloomberg, Jenny Chase who is the lead solar analyst with Clean Energy Research Group pointed that the disruption to solar hasn’t been this bad in more than a decade. The higher prices are further going to affect the demand and they will also impact the commissioned projects.

In India, about 10 GW of projects may be impacted, equivalent to more than a quarter of the country’s current capacity, Mint reported, citing unnamed developers. Large-scale projects in the United State could also get postponed, analysts at Cowen & Co. said. 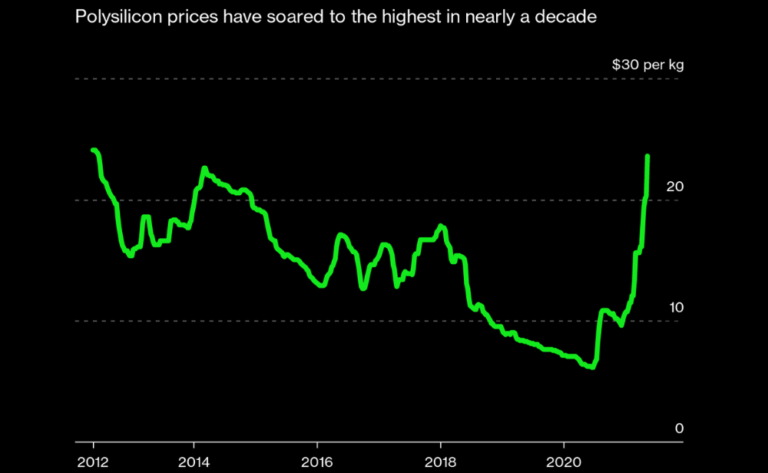 Polysilicon which is an ultra-refined form of silicon is the most common material on the earth. It is commonly found in beach sand, but still, the centre point of this crisis is the polysilicon.
Why is it so? That’s because the manufacturers of polysilicon were not able to meet the required pace to deliver the product to the module manufacturers.

According to the PVInsights, the price of the purified metalloid has reached $25.88/kg from $6.19/kg, and that too in less than 1 year.

According to Philip Shen who is an analyst at Roth Capital Partner, the price of polysilicon is estimated to remain the same by the end of 2022. The entire solar industry supply chain is under a crisis.

As per the Vice President of Canadian Solar, Mr. Xion Haibo, the downstream of polysilicon is very painful. To reduce the losses, companies are reducing the production which again is directly affecting the demand and ongoing projects.

But there is also a positive side of this crisis, Vena Energy Pte is going forward and locking as many possible orders for the future at the best price. As per the CEO of Vena Energy Pte, this is a short-term crisis, some projects will get affected because of this crisis but this will hopefully not last long.

If you liked this information or you want to give any kind of suggestion, you can comment below in the comment box. Stay connected for important information with Ornate Solar.