SolarEdge is a globally leading manufacturer of smart energy solar inverters & comes on the TIER-1 rank list. They are also known for designing their inverters, which maximize power generation at the individual PV module level while reducing energy costs. Mr. Guy Sella founded the company in 2006 in Israeli.

The headquarter of SolarEdge is based in Israeli & manufacturing plants in China, Hungary, Israel, Vietnam, Korea. Of which, the bulk of manufacturing facilities are located in China and Israel. 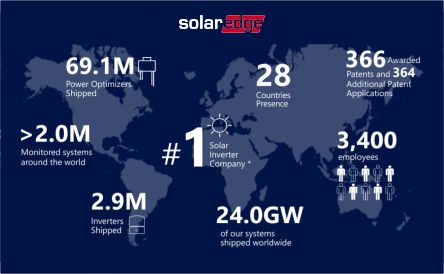 SolarEdge has a presence in the residential, commercial, and utility markets. Since they have multi-level testing involved in product designing and analysis, you can trust the quality of their products.

If we talk about the prices of solar inverters, it depends on some factors:

If we talk about the load requirement, it is directly proportionate to the price of the solar inverter. The more load the solar inverter requires higher its price. Just for your knowledge, the price difference can be substantial, It completely depends on your required load. For better clarity, let’s understand this with an example:

If there are two buildings named A & B.

Since building B’s power consumption is more than the building A, it would need:

That’s because they use batteries which adds to the cost of the entire system. Also, there’s a replacement cost involved depending on the longevity of the batteries.

The technology of The Solar Inverter (MPPT / PWM):

The main motive of the solar inverter charge controller has to prevent the batteries from overcharging. The charger controller modifies the power generated from the solar panels into the required amperage/voltage and then sends it to the solar battery.

On the other hand, the MPPT charge controller track the solar panel voltage and current in real-time & ensures that the solar array delivered the maximum to the solar battery. It draws maximum power from the solar arrays and then works as a modulator that varies its output voltage to match that of the battery. In case, the voltage needs to be stepped down, the current outflow is increased to ensure maximum power output and faster battery charging.

The Features & Warranty of The Solar Inverter:

The price of a solar inverter also depends on what features are available in it. The solar inverter with smart technology will always have more price than the solar inverter with basic functionality. Along with this, the inverter’s warranty factor also affects its price. Features like LED screens, advanced safety features, internet communication & wireless connection, etc. drive up the cost.

**Note: Above price of the SolarEdge Solar Inverters (including 5% GST & 1% transportation) can vary +/- 10-20% depending on location and project size.

Solar Inverter of SolarEdge has a 12-years warranty that is expendable for 20 or 25 years depending on the inverter model. The consumer can avail of the warranty extension within 24 months of the purchase of the solar inverter and for this, the consumer will have to pay a one-time payment fee.

How Can We Help?

Hope this information about the SolarEdge solar inverters is helpful to you.